Urban Poling takes off in Kingston

Reprinted from the Kingston Whig Standard, Oct 3, 2016–by Michael Lea 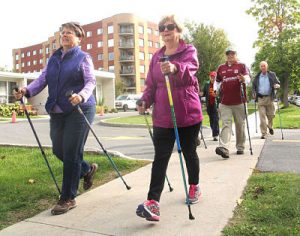 Just three years ago, problems with his legs meant Wayne Barnett had trouble walking. He still tried to get in his exercise, but he could barely make one lap around the track at the Memorial Centre.

This past summer, he made a 25-kilometre hiking trek in Scotland that included climbing a 1,000-metre-high mountain.

He credits a simple exercise for the transformation: pole walking.

“Without the poles I wouldn’t have been able to do it,” said the 67-year-old.

Pole walking, or urban poling or Nordic walking — whatever you want to call it, has been around ever since someone first used a stick to support themselves. Hikers have used poles for years to help them up inclines.

European cross-country skiers used their poles while exercising when there was no snow. The concept crossed the Atlantic to North America, where it was adopted as a separate style of exercise.

Unlike other fitness fads that caught on and died just as quickly, this one stuck around.

Poles were specifically designed for the sport. Features included antivibration systems, rubber tips that could be pulled off to expose metal spikes for winter, better handles and lengths that could be changed to suit the user.

Kari Galasso, of Fit to the Core, has been pole walking for 10 years and is now a master trainer.

Of all the fitness components the company offers, poling “is the one I enjoy the most, absolutely,” she said.

“I am getting people outdoors, getting people active, having people experience success with an activity. It’s an activity that almost anybody can learn and it gets people going to places they didn’t think they’d be able to go, walking farther than they thought they could walk, walking with better posture, less pain. It is just the most rewarding thing I have ever done in my life,” she added.

“It does wonderful things for upper-body conditioning, so that’s why it makes it such a good cardiovascular activity.”

You are using muscles from the waist up, ones you don’t use while walking.

She stressed it is important to have your arm straight out and then plant the pole properly before pushing it backwards.

“It’s that plant-and-push that really activates the upper-body muscles in the core.”

Pole walking is “absolutely not” just for seniors, she said, even though it can be an effective source of gentle exercise for older walkers and a way to offload pressure from sore hips, knees and ankles.

“It is very much a fitness activity, and there are all kinds of younger people picking it up as an alternative to impact activities like running,” Galasso said. “It will take walking and add 40 per cent of the cardiovascular demand if you are doing the technique properly. If you want to add the fitness benefit, you have got to use really good technique and put some effort into it.”

There is a common misconception that you will increase your heart rate if you just use the poles, she said.

“Unfortunately not,” she said. “There has got to be some work put into it.”

She has been teaching classes in the sport for the seniors association for 10 years and has seen a definite increase in poling’s popularity locally.

“My classes are the biggest this year than they have ever been.”

The social attraction of poling is “huge,” she said.

“I have people who have been in my classes for seven or eight years because of the social aspect. It’s fun, it’s enjoyable, you are out in nature.”

There are different types of poles. Galasso prefers Urban Poles, which have a mid-range price of about $100 per pair.

“The old adage ‘you get what you pay for’ really does apply here,” she said.

The pole company was also instrumental in introducing the sport to the YMCA here.

Leslie Dunn, the supervisor of adult programming at the YMCA, explained Best Health Physio first held clinics in the sport at the facility.

“I could really see the benefits, how it works for people,” she said.

Then Galasso got in touch with her and, through Urban Poling, offered not only free certifications for trainers, part of their program for non-profits, but also some free poles so they could start their classes right away.

They have been running for about three weeks on Mondays and Thursdays, starting at 9 a.m.

Wayne Barnett first got into poling when he saw an ad for it while at the seniors association.

“So I went to see what it was all about, met Kari and it was instant addiction to the program.”

As well as being able to walk further, he also lost about 40 pounds.

“They made it clear my sedentary lifestyle could not continue. I had to do something,” he said.

Poling was one recommendation, so he, too, took one of Galasso’s classes.

“It’s the perfect exercise for people who don’t want to exercise.”

It doesn’t require much money or skill, it isn’t competitive, it gets you outdoors and it provides a nice social time, Stewart said.

It provides a period of exercise simple walking can’t match, he added.

“If you go out and walk, you are just strolling. That doesn’t really do anything for you. The poles actually increase cardiovascular activity. But it doesn’t exhaust you. It’s not like running, where after a few minutes you can taste blood and you think you are going to die,” Stewart said. “You can go for a long time with poling. When you are finished, you have got a sweat on and you know you have had a good workout. It is just a great introduction to exercise.”

His poling has taken him to “trails I have never before seen though I have lived here all my life.”

Susan Kay, 68, has been poling for about 15 months. She started as a newcomer to Kingston who was looking for a good way to meet new people.

“I heard about urban pole walking and the rest is history. I love it,” she said.

Kay has always been a walker but had never used poles before. She noticed the difference right away.

“Using your upper body expends a lot more energy and burns a lot more calories. It is truly the first physical class I have ever joined that I truly look forward to going to.”