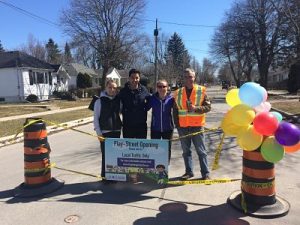 Play-Streets are temporary street openings that provide a safer space for kids and adults to be physically active while building community.  Play-Streets is a world-wide movement, finding success in Bristol, UK;Toronto; Seattle; and Los Angeles.

Kingston Gets Active hosted two pilot Play-Streets during April’s Kingston Gets Active Month. Residents applied for a mini-grant to host a Play-Street, alleviating the need to submit paperwork to the City and pay the usual $300 to close a street to cars.  The two Play-Streets took place on Cameron Street (April 21), and Charles Street (April 29), with kids riding bikes, playing street hockey, and skipping rope, and neighbors who had never met connecting for the first time.

Brittany McBeath, the Queen’s University graduate student who is coordinating the initiative said, “This is about promoting physical activity and community connectedness. It’s something we all did as kids growing up, and it’s not as available to kids today, to just go outside and play in the street.”

Based on feedback from the pilot Play-Streets, the next step will be to assess interest in implementing a Play-Streets model in Kingston.

You can read more about Play-Streets on the Kingston Gets Active Website. Or read about the Cameron Street Play Street in the Kingston Whig Standard’s article:  Initiative Encourages Outdoor Play(April 29, 2018).