New Skate Park to Open May 3 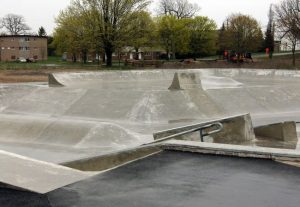 From the Kingston Whig Standard:

KINGSTON – After seven years of painstaking effort, the 8,000-sq.-ft. Shannon Park Skate Park will finally be hosting a grand opening celebration on Wednesday.

Gillian Moss, of the Community Response to Neighbourhood Concern (CRNC), was part of the team that made the park come to life starting in 2010.

“It took a lot of fundraising, which we had a few disappointments to start with and that’s partly what took longer, and many hours of working with the designers and the engineers and the construction people,” Moss said. “It was a partnership with the City of Kingston, but we were basically responsible for raising the money.”

“It was a long process and we’re very relieved to get to this point,” Moss said. “Hundreds of hours were put in by the volunteer board.”

The park is suitable for skateboards, cyclists, rollerbladers and push scooters and while the park’s construction was completed last December, Wednesday will be the party. Moss said there will be live music, a few speeches, the Trillium Foundation will be making a special presentation, a ribbon cutting and a skateboarding demonstration.

“There were a couple of different items people were looking for recreation-wise,” Moss said. “The splash pad caters to younger children, so we wanted to do something for the older age group and we came up with the skate park. When we first found out the type of money we were looking at raising I nearly, well I did fall off my chair. It was pretty daunting.

“We’ve had a lot of support from a variety of donors and we can’t thank them enough because it wouldn’t have happened without them.”

Wednesday’s celebration will run from 3 to 5:30 p.m. at the corner of Daly and MacCauley streets. For more information, go to www.crnckingston.ca.